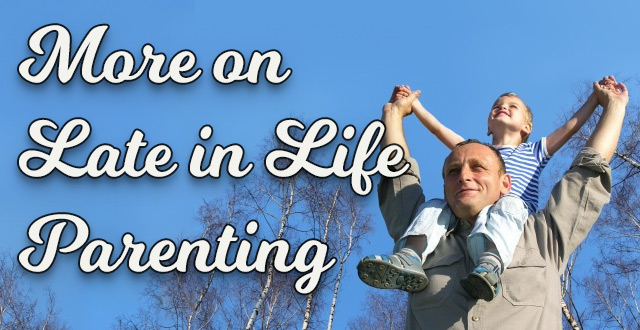 Parenting later in life is a big decision, but has some enormous rewards.  If you’re still considering taking on the challenge of raising a child, here are 3 more things you need to know.

Whether you’ve had infants of your own or not, raising a baby will be a major wakeup call. Midnight feedings, colic, spit-up and sleep deprivation can be hard on anybody. But your senior years may see this part of parenting as a little too much to handle. But if you have the patience, willpower and energy to take this on, bringing up a baby can be very rewarding. It is important to note that foster parents of infants can become very attached to their children. So you should be prepared to have to let go of this child you cared for if their family circumstance changes.

Despite the countless hours, infants are highly sought after with foster and adoptive parents. You are not quite as likely to look after one as an older child. And, although modern medicine makes it possible for women in their later years to bear children, it is not generally recommended to put that kind of strain on the body. Even though some women menstruate past this point, carrying a child after age 50 poses many risks for mother and child. The chance of genetic mutations rises significantly as a woman’s eggs age. And her ability to recover after delivery or cesarean increases.

Beyond this, most women will have to undergo invasive and expensive therapies to bear their own children. Men have it a bit easier, being able to impregnate all their lives. But the quality of their sperm does take a moderate dip further along. Not to mention, these more mature parents are not likely to be around to see their children grow up. You probably won’t be playing ball in the back yard at 75.

Foster and adoptive parents are more likely to care for children and teenagers. Many of these children have behavior and emotional problems because of any number or combination of life traumas. Just being separated from their parents is a trauma in itself.  So you need to be physically, mentally and emotionally capable of caring for a vulnerable and potentially volatile child while making sure you retain your won sanity. Foster parent training and support groups can help with these challenges.

If you had your own children a bit later in life, you are likely to have a more patient and adult relationship with your children and teens. As you have more experience and understanding, it’s easier to give them more responsibility and independence and fewer rules. You’re more likely to speak than spank, and more likely to negotiate than command. As you settle into life’s golden years keeping a peaceful home is more important than having it your way all the time.

3. Raising children of other races

Foster and adoptive parents can choose some factors in the life of the child they take on. If you choose to take on children of other races you will have to put some effort into learning about and respecting their cultures. This of course goes for their religion and nations of origin as well. Facing the realities of societal expectations and pressures may be something you’re unfamiliar with. But some sensitivity training and help from other community members with a similar background could help close the cultural gap.

Parenting later in life can be exhilarating or exhausting. You should be well prepared and aware of what you’re getting into if you decide to take on the endeavor. Whether it’s your first or fifth foray, parenting is often the experience of a lifetime.

Georgia D. Lee is a University of Miami Alumna who seeks to empower, inspire, enrich and educate anyone with an open mind, heart and spirit through her most treasured medium - black and white!