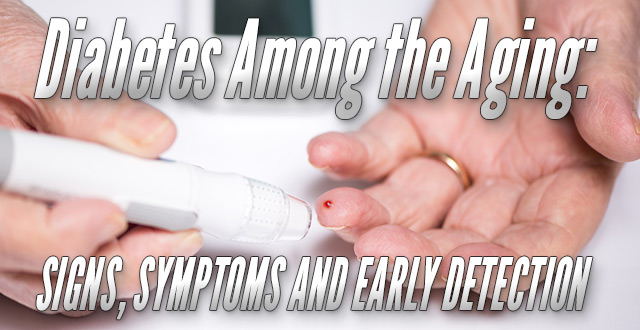 More than one-quarter of the US population aged 65 and older have diabetes, and approximately one half of all seniors are afflicted with pre-diabetes. The keys to changing this terrible statistic are education and preventive care.

Knowing the signs and symptoms of diabetes as a developing condition can aid in stabilizing glucose levels. Even though each person is different and some have one or two of the symptoms, while others have all or may present none, the benefits of knowing what you are dealing with are potent and undeniable.

The Power and Tools of Early Detection and Pre-Diabetes:

Early detection and treatment of diabetes can greatly decrease the risk of developing serious complications. While most are familiar with type 1 and 2 diabetes, the term, pre-diabetes still lurks in the shadows of ignorance and misunderstanding where it can do the most damage. According to the Center for Disease Control (CDC), 86 million Americans including 51% of people aged 65 and older, are afflicted with pre-diabetes. The most disturbing statistic is the fact that of these figures, an estimated 90% of those suffering from pre-diabetes don’t even know it.

Pre-diabetes often presents no symptoms and that is why many don’t know that they have it. So how can you know if you have this condition? According to the American Diabetes Association, a hemoglobin test known as an A1C can indicate the body’s average blood sugar levels from the past two or three months. It can be done with a small drop of blood from pricking a finger or as part of having blood drawn in a lab or doctor’s office. A1c levels of 6.5 or higher are clear indicators of pre-diabetes.

What Are The Causes of Pre-Diabetes?

Lifestyle, food, exercise, stress and sleep all play a role in the development of pre-diabetes as well as family history and genetics. Researchers are still investigating these factors but there is no simple answer. For example, while obesity is certainly one catalyst for insulin resistance, many people who are overweight never develop pre-diabetes and some with pre-diabetes have never been overweight.

How Can You Stop Pre-Diabetes Before it Gets Worse?

Remember that old saying about the cucumber and the pickle? In order to remain a cucumber, you have to address food and lifestyle options so that you don’t enter the irreversible stage of becoming a pickle. Put your focus on living a healthy lifestyle, which includes: healthy food choices, controlled portions, and increased physical activity. Research also indicates that losing some weight (10-20 lbs) and keeping it off can improve general health and delay or even prevent the onset of type 2 diabetes.

Some Signs and Symptoms:

Diabetes is difficult to diagnose in senior patients because often there are no symptoms presented until the disease has taken hold. Individuals with diabetes can experience some or all of the following symptoms:

Many senior citizens have problems with mobility and isolation, and financial problems can negatively affect medical care and attention. Not being able to afford medication is a serious issue powerfully depicted in a recent cartoon indicating a pharmacist dangling a vial of insulin to a waiting customer with the caption underneath reading: “Your Money or Your Life.”

There are other problems as well. Seniors may skip medications in order to make the prescription last longer or forget to take them altogether. They may also forget to eat and experience a lack of interest and/or ability to shop for food and prepare meals for themselves.

For senior citizens, the three most important weapons in their arsenal to combat diabetes must be education, education and education. That old saying about knowing one’s enemy couldn’t ring more truth when it comes to facing this formidable foe that will steal your eyesight, your kidneys, your teeth, your limbs, and ultimately, your life.

Don’t let this happen to you. Fight back!

Being diagnosed with diabetes can be a very scary thing, and it can easily make your life stand still for a moment. ~ Charlie Kimball