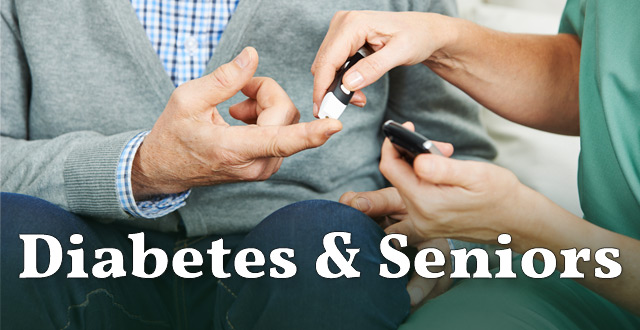 Diabetes afflicts people of all ages, and living with this disease known as the ‘silent killer,’ is no picnic at any stage in life. While contracting the disease in youth is the worst scenario because it is a progressive malady that requires extreme diligence and care, as an older person it presents its own set of problems and directives. It is estimated that in the Unites States today, about one in every four people over the age of sixty is a diabetic. Each year, approximately 1.3 million new cases of diabetes are diagnosed, with type 1 diabetes representing about 5% of the cases and type 2 accounting for 90-95%.

What is the difference between Diabetes 1 and Diabetes 2?

Type 1 diabetes usually occurs in people under the age of 20 and is characterized by the body’s inability to produce insulin. With type 2, daily medications aid the insulin that is produced but is unable to circulate through the body, a condition known as insulin resistance. Diabetes in seniors can be very problematic because it can result in loss of vision, kidney failure, heart and artery blockage and sometimes the amputation of a limb.

Despite the fact that diabetes has reached epidemic proportions, there is still much misinformation and considerable stigma surrounding its causes. Most people associate obesity with the onset of the disease, and assume that all fat people either are or will become diabetic. This is only partially true, as obesity is just one of a string of predetermined conditions, and many overweight people are not diabetic. Diabetes has a genetic component as well, and while your genes do not positively dictate that you will contract diabetes, they do indicate a predisposition to the disease.

1. Diabetes is not a serious disease.
2. Diabetics must eat special foods and not just “healthy” foods.
3. Diabetics can’t eat sweets or chocolate.
4. Diabetes is contagious.
5. Diabetics can eat as much fruit as they want.
6. People with diabetes are more susceptible to colds and other illnesses.

In many instances, seniors with diabetes have specific problems because they have co-existing medical conditions that can make their care more complicated and subject them to unwanted side effects from necessary medications. Also, a great number of older people are less likely to seek and receive proper counseling concerning diet and lifestyle.

One of the worst aspects of diabetes when it affects seniors is the fact that it is often not diagnosed for many years because tell-tale symptoms don’t appear until long after the disease has gained a foothold in the body. These can include; extreme thirst, frequent urination, sudden weight loss or gain; flu-like fatigue and blurred vision.

What to do if you are diagnosed with diabetes?

First, you must accept the diagnosis and educate yourself about this disease. Knowledge is the most forceful weapon against its power to destroy your organs and the quality of your life. Take a deep breath and face it. You have a disease. Now what?

Most hospitals offer free seminars for those who are newly diagnosed. They usually run for one to two days and are very helpful in understanding what you are dealing with. Bring along a loving friend or relative and a notebook because there is so much to learn that your brain will not be able to wrap around all of it at once.

Armed with your new knowledge, evaluate your lifestyle and food choices. You will need to make some changes in both and you must accept that. In the past, this diagnosis was a death sentence, but today so much more is known about the disease and treatments that a normal life is possible, albeit alterations in diet and daily routines will be necessary.

So face the dawn, no matter how dark the sky. There is hope and there is help. Remember the fiery words of singer, Patti La Belle, who captured the fighting spirit needed to battle this terrible disease with her powerful words:

I have diabetes, but diabetes doesn’t have me. ~Patti La Belle