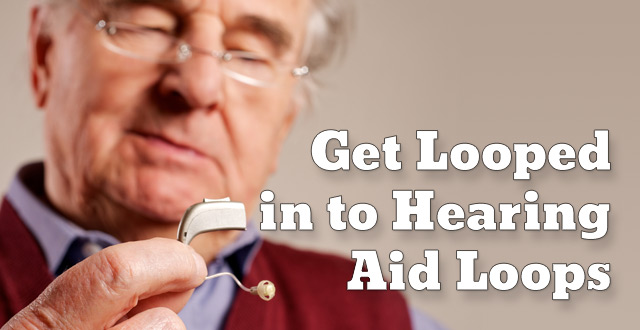 What do Westminster Abbey, The Detroit Metro Airport, the Seattle Repertory Theatre and Wegman’s supermarket chain all have in common? They’ve each installed “hearing loops”—a simple technology that helps millions of people with hearing loss. Consisting of copper wires embedded in the perimeter of a room, the loops serve as assisted listening systems, enabling people wearing hearing aids to hear speech more clearly by blocking out background noise.

Think of them as the WIFI of sound. The loops produce a magnetic field that transfers sound signals directly to any hearing aid or cochlear implant that is equipped with a telecoil receiver—tiny wires which are already inside of the majority of hearing aids. Nothing is required of the hearing aid user other than pressing a button on the aid to activate the T coil, and the user instantly experiences an entirely new level of hearing quality in locations that for too long have been inaccessible due to ambient noise. As hearing aid wearers know all too well, hearing aids designed to work in conversational settings often fail in the sea of garbled noise that envelops crowded public spaces. With hearing loops, actors on a stage, announcements over loudspeakers, and music in a concert hall all become crystal clear.

The technology has been around for quite some time, but it’s been a long time coming for this boom to the hearing impaired to gain traction. Early designs were patented in the late 1930’s, northern European countries began installing them in schools and places of worship in the 1960’s, and only in recent years has the U.S. begun to expand broad access to the service. Just this month, the Fresno California Convention & Entertainment Center’s Saroyan Theater and the Fort Atkinson Wisconsin Senior Center got loops, and hundreds of additional sites throughout the nation are slated to join the ranks of a nationally-expanding movement to serve people with hearing loss. This burgeoning technology, along with increased access to affordable hearing aids through the big box stores and online shopping portals such as Embrace Hearing, means more and more Americans will be able to enjoy the benefits of high-quality sound.

To get a sense of just how dramatic the difference is with a hearing loop, check out this video of a recording at a New York City subway booth equipped with a hearing loop. Anything that can make an NYC subway announcement intelligible is truly a remarkable thing. Airports, sports arenas, banks, taxi cabs, shopping malls and museums all across the country that boast hearing loops can be spotted by a recognizable blue and white sign picturing an ear and “T”.

To search for hearing loops near you or to plan for travel, the Hearing Loss Association of America’s LoopFinder.com contains a searchable database of venues. Another helpful tool is the Assisted Listening Device Locator map, which has the advantage of providing searchable categories such as healthcare facilities, houses of worship, and theaters.

By the age of 65, 1 out of 3 people has hearing loss, and the need for this technology is growing faster than the installation of new loops. To learn more about how to advocate for a new hearing loop near you, visit HearingLoop.org and get looped in to the revolution.

Gabe Fenigsohn, Research Manager at Cardwell Beach, holds a Master's from NYU and is a contributor to The Huffington Post.