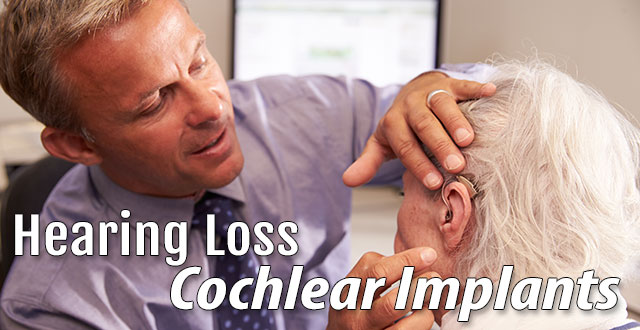 While most people do not consider hearing loss in seniors as an important disability to be treated since it is not life threatening, new research points to evidence that improving hearing can help improve the quality of life for seniors apart from preventing depression and loss of cognitive skills and abilities.

As cochlear implants and the requisite surgery together can cost around $100,000 seniors without significant hearing loss were not considered for it. However, the new study boosts the case for seniors who are healthy enough to undergo the two hour surgery to flip the switch for it. Insurance payments should cover the cost of the implant in most cases.

The study included 94 people aged between 65 and 85 who received the implants. They were tested for depression and cognitive abilities before, after six months, and 12 months of the implants.

The study found that the implants improved quality of life of the seniors, their thinking skills, and lowered the depression rate among them.

According to the study the percentage of patients who were free of depression rose from 59% to 76% after one year of receiving the cochlear implants. Additionally, more than 80% of the seniors with lower cognitive scores improved their scores a year after receiving the implants.

Other researchers have also said that they are not surprised by the findings. In the US deafness among seniors has been wrongly diagnosed as dementia or cognitive dysfunction, according to one expert.

Sparkling Aspects in every Direction

When seniors begin experiencing hearing disabilities, they should not neglect this as a normal effect of aging. Instead, seniors should get their hearing tested at regular intervals and open the door for cochlear implants if they are medically fit to undergo the surgery. This will help improve your quality of life, keep your faculties alert, ensure that your cognitive skills do not degenerate, and also keep depression at bay.

While many of our senses begin to fail as we age, seniors should get their hearing tested just as they would their eyesight. Obtaining medical help to retain both hearing and eyesight can help seniors lead active lives that are interesting and productive.

Just as seniors need to take care of their physical and mental health, they also need to take care of their hearing and eye sight. Apart from assessing your hearing abilities, you should also be watching for signs of hearing loss in your partner. If they do not respond to your calls, especially when they cannot see you, they might be experiencing hearing loss without being aware of it.

One Factor Leads to Another

Those interacting with seniors such as assisted living home staff or children should also be alert to the first signs of hearing loss in seniors and take prompt remedial steps. A senior who can hear at least some of the conversation around them is likely to be more involved in daily activities and less likely to slip into depression or lose their cognitive abilities. While loss of hearing is not life threatening it should still be treated as it affects the quality of life of the senior and their caregivers.

Prompt treatment can help stem hearing loss or a cochlear implant can help restore hearing, ensuring that seniors can participate better in the activities around them and still be more functional as they grow even older. Not only functional, productive!

Benjamin Roussey is from Sacramento, CA. He has two master’s degrees and served four years in the US Navy. His bachelor’s degree is from CSUS (1999) where he was on a baseball pitching scholarship. He has an MBA in Global Management from the Univ. of Phoenix (2006) where he attributes his writing prowess. He now lives in the Phoenix area after living in Cabo San Lucas, MX for 3 years. He enjoys sports, movies, reading, and current events when he is not working online.