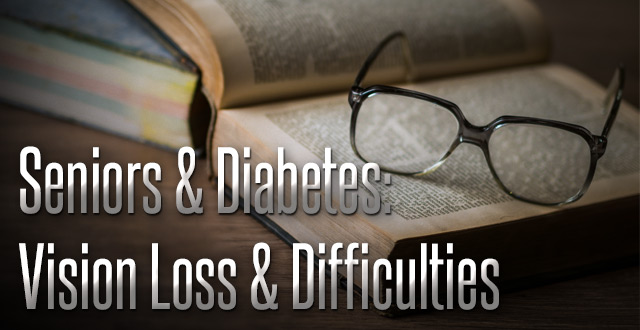 Diabetic Retinopathy (DR) is one of many complications associated with Diabetes.  It is a perilous and destructive condition because its onset is like a swift and sudden tidal wave that crashes on the shore without any warning signs or symptoms. For this reason, seniors with diabetes are always advised to have eye exams at least once annually.

The numbers are staggering. According to the World Health Organization, more than 170 million people globally have diabetes, and this number is expected to increase exponentially to 366 million by the year 2030. An estimated 5 million diabetic sufferers also have DR and these rates are destined to skyrocket due to a lack of access to health care in poor nations.

The American Diabetes Association estimates that about 90% of Americans with diabetes have type 2. The body fails to produce enough insulin for healthy human function, which in turn leads to insulin resistance and rising glucose levels in the bloodstream. It is this destructive process that can and often does eventually damage the kidneys, nerves, heart and eyes.

Those who have had diabetes for at least a decade have an 80% risk of developing this crippling condition. According to the U.S. National Institute of Health, DR is the leading cause of blindness among working-age Americans.

According to the Center for Disease Control (CDC), between 12,000 and 24,000 new cases of blindness from diabetic retinopathy occur annually in the United States, and many could be prevented given the advantage of an early diagnosis. The recurring problem is a lack of education among diabetic Americans who are blissfully unaware of their risk of severe visual impairment.

The damage to blood vessels in the eye is the primary cause of diabetic retinopathy. Over time, blood leaks from the malfunctioning vessels, obstructing proper vision. If this goes without medical attention, results can be disastrous and sufferers may end up being able to distinguish light and dark, but nothing else.

Factors that can influence the onset of DR

Undiagnosed, uncontrolled diabetes permits the accumulation of high levels of glucose to build up in blood vessels. This obstructs the general blood flow to the body’s organs, and that includes the eyes.

The following factors should be considered:

Prevention and Treatment of DR

The key to preventing and/or slowing down the development of DR concerns diligent diabetic management, which specifically includes annual eye screenings, maintaining a healthy diet and consistent regulation of blood sugar, cholesterol levels and blood pressure.

What kind of treatments are preferred?

Key factors in determining the proper course of treatment for seniors are low cost surgeries and the avoidance of expensive surgeries. Pan-Retinal Photocoagulation, or PRP for short, is an effective medical technique, which utilizes a laser to arrest the growth of new and abnormal vessels caused by diabetes. It may require follow-up treatments, but is still less invasive than surgical options and less expensive than retinal drug injections.

Hope and help for seniors

For senior citizens 65 or older who have not seen an eye doctor in the last three years, there is help through Eye Care America, which offers a free comprehensive eye exam that specifically checks for DR. This public service program is part of the Foundation of The American Academy of Ophthalmology. It also most generously covers up to one year of care for any eye disease detected during the exam for those who are eligible.

Like so many things in life, acceptance is the first step to making changes in our lives. While diabetics may walk a stonier path than others, there is still the need to be grateful. Not only could most diabetic conditions be worse, there is almost always the ultimate chance to make things a lot better, especially if diagnosis occurs early enough,

Life is not over because you have diabetes. Make the most of what you have, be grateful. ~ Dale Evans