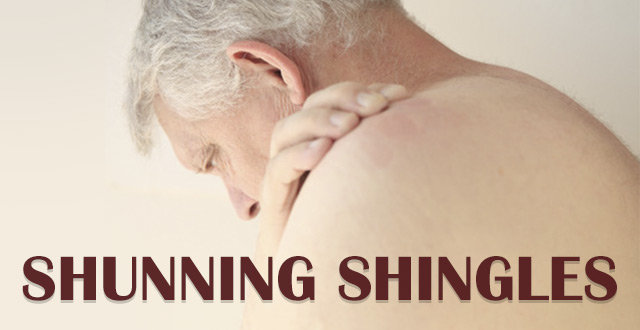 If you had chicken pox as a child, you may not remember how uncomfortable it was. But if you ever developed shingles, a disease caused by the same virus responsible for chicken pox, you’ll likely never forget the experience. It’s hard to put the blistery red, painfully itchy rash out of your mind, even years down the road.

Shingles, also known as herpes zoster, affects one in three people—which makes it something worth your attention and understanding whether you’ve been plagued with the disease or not. If you haven’t had shingles, there’s still time to get it. In fact, shingles is more common among older adults. The good news? Knowing the facts about shingles can help you avoid it.

You wake up with an unexplainable rash and find yourself in a panic. “It’s shingles!” Not so fast. Many skin rashes with similar symptoms have nothing to do with the varicella zoster virus that causes shingles. Your problem may still need addressing, but don’t just assume an uncomfortable rash is shingles.

Hives, for example, present in a similar fashion as shingles, although most rashes due to hives are caused by an allergy and appear as raised, welt-like bumps rather than fluid-filled blisters. Similarly, psoriasis is marked by red plaques with white scales, and dermatitis looks like dry, inflamed skin.

On the other hand, if you develop a red itchy rash, don’t assume it’s not shingles. According to the National Foundation of Infectious Diseases, nearly one million people in the United States get shingles yearly, half of them at age 60 and older.

Shingles can form anywhere on your skin. It usually appears on the back, chest, and face, but people have had shingles outbreaks on the arms, buttocks, virtually anywhere on the body—but usually on one side only, another giveaway it’s shingles. Be especially on guard for shingles that gets in the eyes; it can cause vision problems, redness, ulcers, glaucoma, and in rare cases blindness.

If you think you can only get shingles once, think again. A report by Mayo Clinic suggests that the chance of a recurrence of shingles may be over five percent and recurrences can happen up to three times. Worse, doctors suspect the percentages will go up as they continue to track patients’ health.

Interestingly, women have a tendency to experience a recurrence more often than men, and even those with severe cases of shingles the first time aren’t immune from a second occurrence.

With the odds of getting shingles one or more times so high, is there anything you can do to protect yourself against the disease? Fortunately, yes. The shingles vaccine, known as Zostavax, has shown promise; however, it comes with a downside.

According to the Centers for Disease Control and Prevention, a large study found that the shingles vaccine provided a 51 percent lowered risk of developing the disease in adults 60 years old and up, along with 61 percent reduced rate of nerve pain. It can also help prevent a recurrence.

Bear in mind the shingles vaccine does have ingredients that certain people are allergic to, like gelatin and neomycin. If you suspect any kind of an allergic reaction to Zostavax or if your immune system is already weakened by any other condition, it’s best to avoid getting the shot. As with any vaccine, you can also develop swelling, redness, or pain around the injection area and the potential, though rare, for more serious problems, including anaphylaxis (shock), which can be life threatening.

Further, the vaccine is only thought to be effective for five years, plus those vaccinated before age 60 may not be protected later in life, when the risks and complications are greatest. In most cases, though, the benefits of the shingles vaccine outweigh the risks for adults 60 years and older.

It Spreads but Not How You Think

Anyone with an active case of shingles, meaning blisters have formed but not scabbed up, is contagious. But there’s a twist: you won’t get shingles from a shingles carrier. If you’ve never had chickenpox or the chickenpox vaccine and you’re exposed to someone with shingles, you could get chickenpox rather than shingles—and only through direct contact with the blisters.

Even if you’ve had chickenpox, you can’t develop shingles from someone who has the disease because the virus is already hiding inside your body. After chickenpox runs its course, the virus moves to nerve tissues in the brain and spinal cord, where it lies dormant. For any number of reasons—from stress to weakened immunity to older age—or for no reason at all, the virus can reactivate on its own later in life, in the form of shingles.

Of course, it’s best to avoid getting shingles in the first place. Not only can it be unbearably uncomfortable and painful, especially in older adults, studies have shown that heart attack and stroke risks are greater after a shingles episode. Inflammation and stress from the pain of shingles may be contributing factors.

While there’s no guarantee you won’t get shingles during your lifetime, you can take action to strengthen you immunity and help prevent the disease. Here are a few tips to follow:

Unlike chicken pox, shingles is much more than an unattractive annoyance. Get familiar with herpes zoster, and make every effort to shun the disease. Your skin and entire well-being are counting on you.

Susie has written and published hundreds of articles for websites and blogs. Her topics of interest include nutrition, fitness, and mental wellness. She especially enjoys helping people find ways to stay healthy naturally.