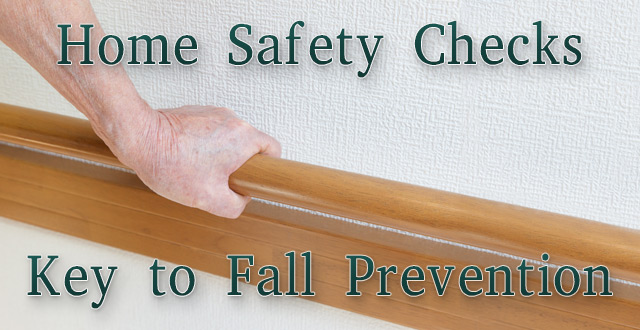 “An ounce of prevention is worth a ton of cure.” –  This adage can be applied to home safety as well. Older adults, especially, are vulnerable to serious injuries from home accidents. A simple fall can often have devastating consequences including death.

June is National Safety Month, an annual observance developed by the National Safety Council to educate and influence behaviors around the leading causes of preventable injuries and deaths.

According to the Centers for Disease Control and Prevention, one out of three adults, age 65 and older, has a fall each year. In 2013, the direct medical costs of falls (what patients and insurance companies pay) was a staggering $34 billion.

A broken hip is the most serious injury that results from a fall. In fact, 95 percent of hip fractures are caused by falling. A significant hip injury can cause an older adult to lose his or her independence and, unfortunately, studies have found that 20 percent of elderly people who fracture a hip die within a year.

Although falls are considered a public health problem, the CDC reports that they are largely preventable.

There are a myriad of steps one can take to ensure home safety such as:

Also, having annual vision exams can greatly reduce the risk of falls. Medications should be monitored closely as many can cause dizziness. Sedatives and antidepressants, for example, have been associated with falls.

So what can you do to lower your fall risk beyond a home safety check? Exercise!

A study by UK-based The BMJ, an international peer reviewed medical journal, found that exercise programs reduced falls that caused injuries by 37 percent, falls leading to serious injuries by 43 percent, and broken bones by 61 percent.

Swimming has been shown to be the most effective exercise for older adults. A 2014 study by University of Western Sydney in Australia revealed swimmers, aged 70+, had “a significantly lower risk of falling” than their non-swimming counterparts. Swimming has also been associated with improved cognitive abilities, lowered blood pressure and enhanced hand-eye coordination.

Older adults and seniors aren’t often aware of the many potential hazards in their home. It may take the fresh eyes of an adult child or even a home health care company that offers complimentary home safety inspections with a focus on preventing falls. An assessment can be quite enlightening, helping the home owner reduce his or her risk and remain independent for as long as possible.

Kerry Phillips has been involved in the 50+ industry for over a decade. She is an account manager with The Ehlers Group, an award-winning strategic marketing and communications company specializing in luxury senior housing. Kerry is a graduate of Florida A&M University and holds a bachelor’s degree in journalism with a concentration in public relations. In her free time she enjoys reading, running and crime TV shows.